Carolyn Bessette Kennedy's wedding to JFK Jr. was so timeless it fits right in with today's trends! 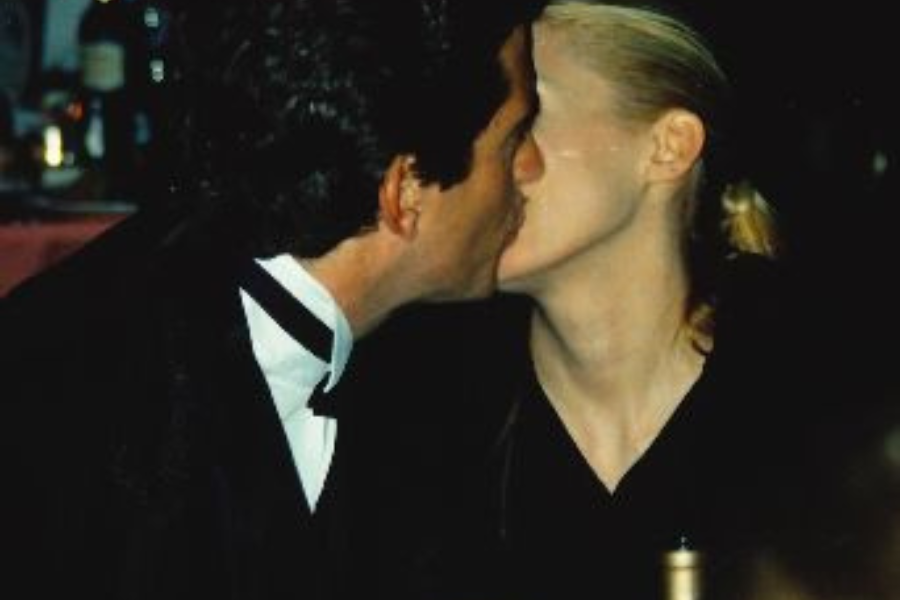 Carolyn Bessette and JFK Jr. wed on September 21, 1996 on Cumberland Island off the coast of Georgia. Their intimate ceremony included a tiny candle-lit chapel, an iconic simple sheath dress, and a photo of a groom kissing a blushing bride's hand.

Carolyn was well-known for her simple and elegant style, and much of that was displayed at her wedding. Even for the time, the stripped-down nature of the ceremony as well as the bride's silky slip-style dress were daring and have been since emulated again and again.

They say what goes around comes around, and now more than ever brides are looking to the young Kennedy couple for their nuptial inspiration.

Carolyn Bessette's bridal look not only indelibly influenced the style of wedding dresses, but still holds up well today and could show up in any current bridal magazine without the blink of an eye.

Let's take a look at some of today's best trends that have been influenced (at least in part) by that little wedding in 1996.

This post is all about carolyn bessette kennedy wedding.

Carolyn opted for a dress designed by her former co-worker at Calvin Klein, Narciso Rodriguez. It was a simple bias-cut silk slip dress with a cowl neck. The dress literally changed the game for bridal trends and was a deviation from the embellished over-the-top styles like Princess Diana's dress from 1981.

Today, there have been an increasing number of designers and brides choosing the clean, simple, sophisticated look, with quality fabrics and cuts that have little to no embellishments. Brides are also opting for different accessories that show off their personalities from gloves, to unique veils, to vibrant florals.

Here are some dresses in a similar style: This dress looks so much like Carolyn's I actually can't believe it! This dress has a little bit more structure than Carolyn's slip sheath. It still has the basic cowl neck and luxurious look! A dress that looks like Carolyn's wedding dress that is literally named Carolyn...Coincidence? I think not! This dress looks so soft I just want to touch it! It has a similar shape to Carolyn's wedding dress and would be perfect for any cool bride!

Gloves have been a huge trend this year, maybe partly due to the resurgence of period dramas like Bridgerton and Persuasion! Carolyn Bessette wore her own long tulle gloves that added the perfect touch of whimsy to her simple gown! I predict that the gloves trend will continue in strength and may even culminate in short bridal gloves! I've seen so many cute options from gloves with bows to satin gloves to fitted tulle gloves.

If Carolyn wore them, you can guarantee that they'll be timeless.

There are truly no words to describe how much I love these gloves and need them in my life.

You can never go wrong with a classic.

Carolyn's bouquet was simple and relatively small featuring all Lilies of the Valley. Over time, bouquets have fluctuated in size and grandeur, at times being huge and adorned with ribbon and other times small enough to hold with one hand. I predict that small bouquets will make a comeback since the large bouquets featuring untraditional flowers are super in right now. I definitely see some people sporting smaller bouquets and I do think it's super chic!

I'm torn between a large and small bouquet for my own wedding! I have been loving the contrast between simple dresses with unique bouquets and veils, but another part of me wants a super understated bouquet like Carolyn's!

Carolyn and John were married in the First African Baptist Church on Cumberland Island, Georgia. The chapel had no air conditioning and only 8 pews. Their wedding had only 40 guests and was kept a secret from the public. This was in stark contrast to other "royal" weddings at the time, with Princess Diana's wedding to Prince Charles televised and with over 3,000 guests (!!!) in attendance.

Since COVID-19 I've definitely been seeing more understated weddings with less guests. People have been doing backyard weddings and even city-hall elopements! Carolyn Bessette truly set the stage for brides who want their wedding to be primarily about the couple rather than putting on a huge party.

Carolyn's desire to keep the wedding private only added to her allure and the public's interest. If you're thinking about having a much more "low-key wedding", take a page out of the Kennedy's book and cut down the guest list.

One of the things I loved the most about Carolyn and JFK Jr.'s wedding ceremony was that it was all candle-lit. I would have payed to be inside that chapel for the ceremony! The photos released after showed the most romantic candle-lit glow coming from inside. It really makes me want to have a sunset ceremony, going into the night-time!

As previously mentioned, the Kennedys opted for understated elegance and chose Cumberland Island for their post-nuptial celebration. The afterparty was held at Greyfield Inn, and many guests stayed there for the occasion. There were only 40 guests at the event and we can assume that a private dinner was held on the historic Greyfield Inn property.

Many couples today are hosting smaller events for their weddings, with a large number of elopements and private dinner parties taking the place of big bashes.

Carolyn wore her signature blonde hair in a low bun with a silk tulle veil for her wedding. For the reception, we know by photos of her cake cutting ceremony that she took the bun and veil out, letting her gorgeous locks shine. This added even more to the laid-back feel of her wedding day.

I've definitely seen a return of the low simple bun for the ceremony and hair down for the reception. It combines the best of both worlds! There has been a stray away from the intricate up-dos of the 2000's and more of a move toward natural hairstyles. Silk tulle drapes more than other kinds of tulle, so this material is sure to be stunning on your wedding day.

One really cute photo of JFK Jr. and Carolyn on their wedding day was the candid of them cutting their wedding cake. While the brides of today are definitely not afraid to blaze their own trail, there are some traditions that make weddings, well, weddings!

One tradition I really love is the cake-cutting ceremony. It's symbolic of doing and enjoying things as a team. Plus, the photos are just so cute!

Okay, so we all know in the 90's it's not as if they had the choice of digital cameras quite yet (everything was film), but the film look really gives the photos a natural touch and makes them look really timeless. I love that film looks more in the moment and less polished.

We are seeing a huge bridal trend lately that is going back to the grainy film look, with videographers even scrambling to learn Super 8 to give weddings a retro feel. I'm going to ask my videographer if they are comfortable shooting free-hand (without a stabilizer) because it just gives more of an unpolished, in-the-moment recording.

This post was all about carolyn bessette kennedy wedding dress.

What wedding trends from Carolyn Bessette-Kennedy's wedding do you want to incorporate in your own?