Revlon's Fire And Ice was a super popular red lipstick from the 1950's that you can still purchase today! 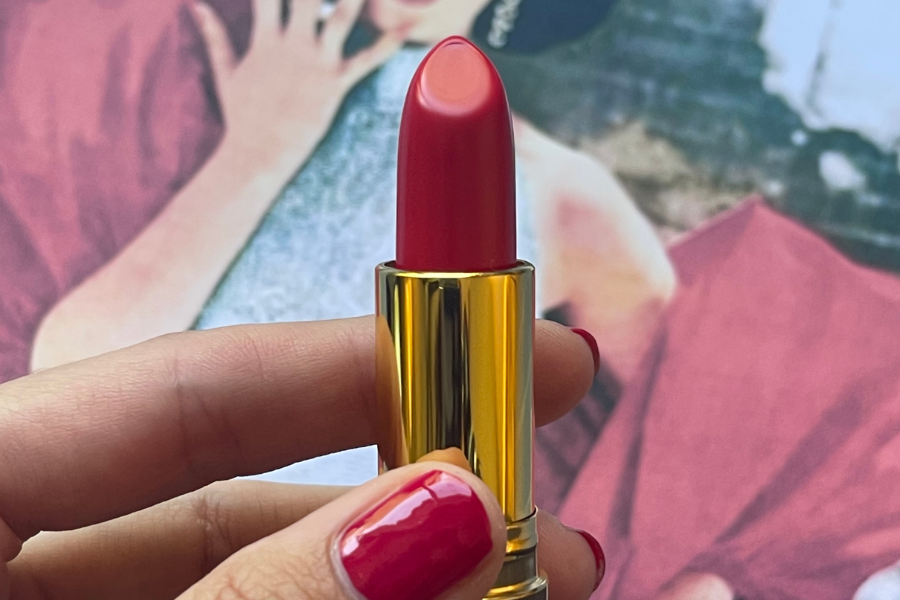 I've been testing vintage lipstick shades that you can still purchase today for a while, and the next shade on my list was Revlon's Fire And Ice.

So far in this series I've reviewed Cherries In The Snow and Love That Red. I would say I'm covering a good spectrum of red lipsticks, all with different undertones!

Fire And Ice was a lipstick shade from 1952 that was described as "a lush-and-passionate scarlet...like flaming diamonds dancing on the moon!" In my last review, I felt that Love That Red was a pretty true red color with neutral undertones. Cherries In The Snow was much more pink underneath. I was curious to see where Fire And Ice lands on that spectrum.

I made a TikTok video explaining the significance of the Fire And Ice ad campaign from 1952 and how it shifted the mindset of makeup companies at the time from advertising makeup as a way to appear more attractive to men to advertising makeup as a way for women to feel good about themselves. This article from Bustle was a good resource to me for the information from that video, so definitely check that out here.

At first glance, Fire And Ice looks very similar to Love That Red. When you have them next to each other they almost look identical. Especially comparing the two to Cherries In The Snow, they look closely related. I had one person comment on my TikTok video that all the advertisements make the red shades look similar. I definitely agree, I think that at more of a distance, it's hard to see the differences between all the red shades.

When I swatched the shade and compared it to all the other red lipsticks, I was definitely surprised by what I found.

This post is all about revlon fire and ice.

Fire And Ice is marketed as a daring red shade for what seems to be good reason. It's bright red with what I would consider to be more coral/slightly orange undertones.

On lighter skin tones I would imagine that the red would look more coral, and on warmer/darker skin tones it probably looks more true red.

There is such a slight difference between this shade and Love That Red that if you're not paying attention, you might not notice. The weird thing with shades of red is that they can look vastly different on various skin tones and in different lighting so it does take a little bit of trial and error trying to figure out which one is the right one for you.

I also believe that anyone can wear any shade of red, depending on the occasion.

For example, Fire And Ice on me is more coral and summer-y. It would be perfect for a tropical beach vacation. Love That Red is more of a true neutral red for that classic red lip. And Cherries In The Snow is a better "every day" wear red for me.

In my next post, I will provide swatches and a full comparison of all 3 shades so you can see them lined up together. Subscribe to our newsletter to stay tuned for that.

What do you guys think? It looks very close to a true red on the swatch but if you look a little closer I think that you can see the warmer undertones of the shade. I have a medium/neutral skin tone so keep that in mind when you're comparing. If you have a skin tone similar to mine, I would say that this red on the lips looks red, with a slight coral/orange tint.

The shade definitely lives up to its name. It's bold and rich, a stand-out red lipstick!

This post was all about revlon fire and ice lipstick.